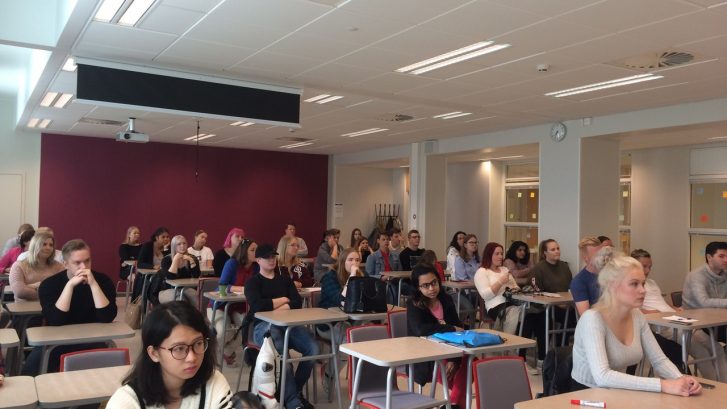 The orientation week for new IB degree students started on Monday from ”Welcome to JAMK and meet the IB!” session when Head of Program Matti Hirsilä and Director of School of Business Asta Wahlgren welcomed new IB students. Moreover, Teachers, peer tutors, student service secretary, education secretary, education export officer introduced themselves. The teachers introduced the subjects that they teach and told some facts about themselves. The next event for the first day was game “New Horizons”, the students were divided into groups, and the main idea of the game was to help to understand another culture and break ice between people. Students were also divided by groups and every group has 2 tutors who help them with different problems and issues not only during the Orientation week but also later. More than that, Campus tour and City tour was organized for new students. During Campus tour the tutors showed the campus and its most important places such as big auditorium, library, cafes and canteen, copy room, info office, etc. During City tour the tutors showed the most popular and important places in Jyväskylä such as Registration office; Health care center; city center with the main street where almost all shops and cafes are located; and Police station. During the second day of the orientation week, language tests were organized in order to evaluate the language level of the students and suggest some support courses if they are needed. Afternoon all new students were invited to JAMK opening ceremony to Paviljonki. There were many students inside and everyone received small gift from JAMK. The ceremony consisted of welcome speech from Mayor Timo Koivisto; Panel discussion in which Rector of JAMK Jussi Halttunen, Chairperson Aila Paloniemi, and Board Chairperson of student union JAMKO Jarna Väisänen participated; student well being group who showed some exercises that all students made in order to have small break; “Madventures” presentation by Riku Rantala and Tuomas Milonoff and the ceremony finished with performance of Finnish singer Pete Parkkonen. The whole atmosphere of the ceremony was great, the students listened with interest and it seemed that they liked the event. Wednesday was organized with the main focus on knowing each other at Hangasjärvi nature trip but the next blog post will be about this trip that’s why here I just say that the event was really super wonderful but let’s discuss it latter.

The next day’s aims were to get to know about the BBA Student Association Konkurssi; to teach how to use IT systems that students will use during their study such as intranet Elmo, e-mail, calendar, etc. and to enroll for autumn 2017 and explain how to use ASIO.

During the last day of the Orientation week Head of the Program Matti Hirsilä had a presentation about IB curriculum and ILO (Intended Learning Outcomes), then for some students who have studied at the university level before, the session was organized. And the last event of the whole orientation week is Beach Picnic that is organized by JAMKO (Student Union) and International Club.

So, my thoughts about the Orientation week. First, I transferred from another University and I didn’t participate in the orientation week of JAMK that supposed to be my first acquaintance with the University. So I was really happy that I can participate in the Orientation week now in order to understand what I missed 3 years ago. Second, I had a chance to communicate with new students form different countries and it was great to get to know different people. And third, I’m a trainee of the School of Business and I helped during the orientation week and it was also wonderful experience for me.

I hope all new students liked the Orientation week and JAMK because we tried to make our best understanding that the first week is so important and difficult because it is new chapter of life when there are so many new things to remember, new people and even new country for international students.