I visited recently Toronto, Canada and noticed some similarities between the cities of Toronto and Jyväskylä. I also learned that the start-up industry in Toronto has succeeded to build up such conditions that we could learn something from in Central Finland.

Metropolis Toronto is located by Lake Ontario and it is the center for trade and finance in Canada. The city’s most famous attraction is the CN Tower (553 m), a symbol of the whole of Canada. The tower that held the title of the tallest building in the world nearly two decades dominates the Toronto skyline with several skyscrapers. City is also known from the Canada’s oldest university, Hockey Hall of Fame, Rogers Centre and Art Gallery of Ontario.

Toronto is a well-known for its large number of immigrants. More than half of the city’s residents are born outside Canada. So, there are several ethnic neighborhoods in the city, such as Little Italy, Greektown and Little India, as well as five Chinatowns. Toronto was last year the world’s 4th safest city according to the Economist’s Safe Cities Index 2017.

Can you see the likeness to Jyväskylä? Well, we might scale it slightly… However, Jyväskylä is located by Lake Päijänne. We have Chamber of Commerce, KasvuOpen and BusinessJyväskylä. We have higher education, Koas Tower (60 m) as well as talk about high construction or even skyscrapers, JYP-ice hockey and Alvar Aalto. The city also promotes internationality and multiculturalism in cooperation with educational institutions, industry and other organizations.

But there is one difference between us. Toronto’s start-up ecosystem is vibrant and inspiring up-and-coming entrepreneurs to launch their own businesses. City support start-ups for example by coworking spaces, incubators, funding and accelerators.  In Jyväskylä start-up ecosystem operation, support and places are more variable. Especially the games industry need more low-threshold instruments.

Toronto Media Arts Centre (TMAC) is a diverse and cooperative environment where everyone can engage with art and technology. With year-round arts and cultural programming, open lab studios, equipment libraries, coworking and social areas, TMAC provide the tools and space to play with art, media and new technologies. Currently there is no staff and the center is 100% volunteer-run by Board of Directors from five different companies.

I met one of the directors, Henry Faber, while visiting TMAC. His company, Gamma Space, is a nonprofit arts-focused company which offers space and know-how for working, playing and learning. Henry is also “the man of TMAC”. He is the fundraiser, event master and janitor who enables TMAC operation and monitors that the code of conducts is followed. He is committed to support causes dear to his heart and wants to contribute to the well-being of his fellow beings or advance principles and values that he believes in.

Donation culture is strong in North America and Canada so Henry and other actors in TMAC get monetary support to success from others with same values. Also, City of Toronto has given the space (23 000 square meters) where to operate. However, money and other support won’t come for free. They have shown with their commitment, actions, projects and events that this kind of space and ecosystem can flourish and produce all kind of benefits to the society.

It is time for Jyväskylä Digi & Game Center

Expa Game Business Co-operative has been developing games industry activities in Jyväskylä for more than six years. About 10 % of Finnish games companies are located in Jyväskylä (about 30 games companies). They employ about 150 people plus trainees. We have bachelor and master education in games industry as well as several projects ongoing and under planning. Now especially esports is growing fast and need quick action through extensive cooperation in Jyväskylä.

At Sustainable Digi & Game Ecosystem -project we are creating an ecosystem, which brings the gaming and digital actors in Central Finland together. An accelerator, where co-operation enriches the know-how of the actors, creates the conditions for entrepreneurship and new business operations. As a result, there will be a Jyväskylä Digi & Game Center established by 2020.

To success in this mission we need a concrete place where to work and collide with different experts, because co-working spaces is critical factor for working and vibrant ecosystem. We have already good premises checked, and hopefully before summer holidays 2019 we can announce that we will get them with the support from city of Jyväskylä. This commitment would be one more step for Jyväskylä to be more like Toronto. 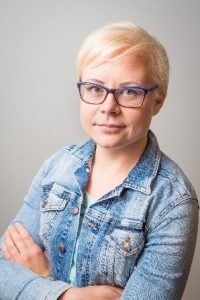 The writer M.Econ Hanna Hauvala currently works as Project Manager at JAMK University of Applied Sciences. She has managed, participated and planned regional research and development projects since 2012. She is a specialist in business, management, sustainability, games industry and quality based on her work experience and education.