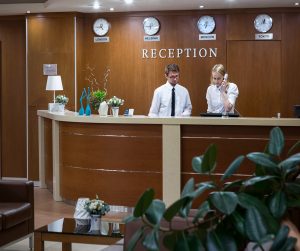 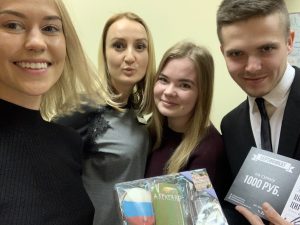 If you have never reported a missing child, had to witness a criminal wanted by Interpol busted and have shifts during all public holidays … then you obviously have never worked at a hotel!

Starting from fall 2018 I was lucky enough to be accepted to work as a receptionist at the top 4-star hotel in Karelia, a republic in Russia where I am from. What strongly influenced my choice of the place was the possibility to be immersed into a more or less international environment. Having been done with the majority of my JAMK studies and my exchange in the Netherlands, I was hungry for having a chance to be back in the melting pot of cultures and nationalities. Working in a hotel seemed like a perfect opportunity to get a taste of that again, so I applied. The competition for the position was quite high – the ideal candidate had to have a degree, be able to speak at least one foreign language and know the basics of a second one, be a very quick learner, be chatty, charming and confident with people. Though the first part of the requirements sounds doable, thanks to my JAMK experience, the people part of it is…well, not so much. I often refer to myself as an introvert, which doesn’t mean asocial or lacking the social skills, but rather a person with a need for recharging after social activities and urge to have regular alone time. For an introvert any social interaction is an energy-draining activity. When you apply this trait to a front office job, you get a challenge, which this position definitely was for me. Simple activities like picking up the phone or being the first one to greet a guest would cause a distress. For the first three weeks I was seriously thinking of quitting it altogether – the amount of stress and new information were too overwhelming. Looking back at it now, I am immensely happy I haven’t. The pressure I was under helped my character growth and reminded me of the undiscovered potential that I didn’t know I had.

When the time will come, don’t be afraid to choose an unfamiliar or scary route. Don’t simply follow what everyone else is doing and always believe in yourself because you don’t even know what you are capable of. Good luck!