The capital of Germany where the memory of History meets art, culture and cosmopolitanism. Berlin or the reflection of the strongest economy in Europe is the meeting point of innovative start-ups. Curious about this specific type of company which has its own mindset, structure and way of working, I chose to do my first internship in a start-up called Philosoffee.

Philosoffee was founded in Berlin in 2016 by Benjamin Thies, Lukas Friedemann and Christian Figueras. The start-up has successfully grown to become the leader of the cold brew coffee market in Germany. With three different products created (organic and vegan drinks in glass bottle), Philosoffee sells them throughout Germany mainly in organic stores, supermarkets or cafés and bars.

Although the Koldbrews are available in few European countries, I particularly helped the start-up to have a broader look. Indeed, during my 5-month experience in Business Development and Sales, I worked to distribute the product in the Netherlands, France and Belgium. As the only non-German employee, I wanted to offer other opportunities and perspectives to the start-up by being in contact with potential and actual clients abroad. Thus, for my first mission, I was responsible for the negotiation and implementation of market entry strategies with distributors outside Germany.

However, working in Berlin was also meaning targeting the city where a lot of alternative cafés, cool bars and original restaurants are popping-up. Whether it was prospecting, cold calling, testing appointments or follow-ups, I was independent in the acquisition of new locations.

Creating a high-quality product is important but developing its visibility online is also crucial. I was taking care of the social media management including content planning, content creation and the audience relationship management. For instance, being daily active on the Instagram account lead to a significant increase in the performance of the Philosoffee popularity and interaction with the online community.

Finally, Philosoffee team was participating to many trade fairs like InterNorga, Gastro Vision, Symposium Feines Essen & Trinken but also festivals such as Immergut or Karneval der Kulturen. The goals were either to gain popularity and selling our products to end customers or to network and find new business partners.

To sum up, my learning curve was incredible with the possibility to act in different areas: business development, sales, operations, marketing and a bit of logistics. My best and worst moment in the same time was when I decided to organize the Amsterdam Coffee Festival by my own and represent Philosoffee for three complete days. After only one month, I was doing my first B2B and B2C trade fair. “Learning by doing” was completely the quote of my mission which was perfect to learn and adapt fast. But it was more exhausting than I thought and even more with an illness that stayed some weeks after.

I am still thankful for the great experience I shared with Philosoffee, a team that welcomed me with open arms and proved me that the language or culture are not a frontier to do a good job. The best advice that I would like to share would be: get out of your comfort zone, you are going to learn for real! 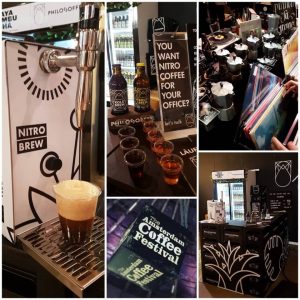