My name is Joonas Rautiainen and I am a first-year student at JAMK University of Applied Sciences. I started my studies already in the spring of 2018, but then had to go to the army. So, I got the invitation to join Nordic Business Forum 2019, and I did not hesitate to accept the invitation. My first thoughts were to just go there and listen to the speakers, but as the event started, I noticed that there were a lot more into it.

On the first day of NBF 2019, I couldn’t fully attend that day due to overlaps with my track courses, but I then joined fully on Thursday. The day started off with a glass of sparkling wine of course and small talks with friends and colleagues. It was time for the first speaker, Sara Blakely. I think her story was very interesting and I enjoyed it a lot. She gave multiple advises from her own career and some that I may use in the future as well. It was quite fascinating that in the first 17 years with her company, she never used any money on advertising just mouth-to-mouth kind of sharing. Very interesting. The second speaker was Carla Harris and I have to admit that she had the most positive speech of the whole day. Her positivism was seen all over her speech and it was a pleasure to watch. She gave seven tips for leaders to become better leaders, from which I took good notice from. They included such things as building trust between you and your co-workers, creating other leaders, be inclusive etc. I think she was the best speaker of the day and enjoyed it a lot. These two women represented the morning speeches and it was time for lunch break and networking.

After the lunch, I decided to advertise our sport business seminar which we were organizing at the same time. I talked with some representatives of companies and got some interests on it, which was definitely the best outcome of the day. Then it was time for Donald Miller and he talked a lot about storytelling and marketing, which I was very interested about. He gave multiple advises and how to create a story for a company and how to show it to the customers. In the end he also gave different questions for companies to ask from themselves in order to gain more visibility. After Mr. Miller it was time for Randi Zu 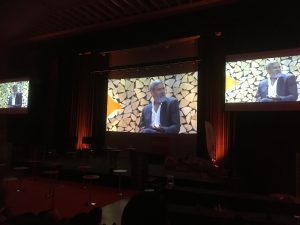 ckerberg, which at least for me I had great hopes for. BUT, it ended up to be the worst speaker of the whole day and many of my friends can agree with this for sure. The last two speakers for the day were George Clooney and Brené Brown. George talked a lot about his journey to be where he is at right now and many jokes included in his speech. It was a delight in a way to listen his speech after a long day. Brené talked 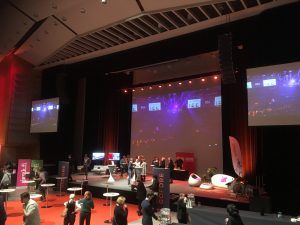 about what are the barriers for courage and how to get rid of those barriers in a workplace. This speech, I think at least Finns have a lot to gain from since we are known as shy and don’t want to hurt others feelings and get out from our comfort zones. She gave multiple advises how to get rid of these barriers and it was very interesting.

In overall, I think the Nordic Business Forum was a big success. I really enjoyed the event and would like to go again next year if just possible. I took many advises from the speakers, which I surely can adapt to my future working life as well. Thank you JAMK for giving this opportunity to join the event.